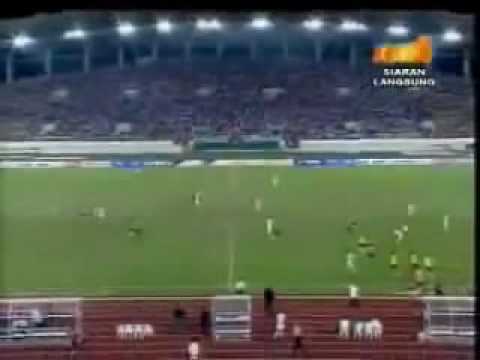 VIENTIANE: — Malaysia have the chance to end their 20-year gold drought when their men’s Under-23 squad play in the final of the SEA Games football competition after trouncing Laos 3-1 at the Main Stadium, National Sports Complex.
Malaysia will play against Vietnam who thrashed Singapore 4-1 in another semi-final match at the Chaou Anouvong Stadium.
Two of Malaysia’s goals came from Baddrol Bakhtiar in the 13th and 79th minute, with Safiq Rahim scoring the third goal in the 84th minute.
Although the Main Stadium was filled by 23,000 home fans, K.Rajagobal’s boys started confidently and made several dangerous moves to test their Laotian opponents.
Baddrol’s goal was the result of a cross from Abdul Manaf Mamat in front of the goal mouth and Baddrol did a scissor kick, sending the ball into the back of the net.
Feeling comfortable with that first goal, the Malaysians slowed down the pace.
Realising the fragility of the defence, Rajagopal took out Sabree Mat Abu to be replaced by Muhamad Azmi Muslim.
It was rather too late as Laos equalised in the 72nd minute with a strike from Kanlaya Sysomvang after he tricked Malaysia’s defence.
However, seven minutes later, Baddrol was Malaysia’s hero with a second goal.
In the tussle in front of the goal mouth, S.Kunalan’s attempt hit the goal post before Baddrol swiftly followed up.
Safiq’s goal, the third for Malaysia, came from a pass to him from Norshahrul Idlan Talaha.